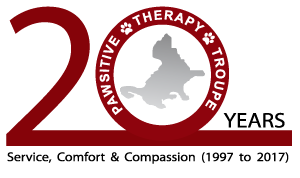 The PAWSitive Therapy Troupe is an all-volunteer 501(c)(3) public charity dedicated to sharing registered therapy dogs with individuals in a wide variety of health care and educational settings--bringing comfort, support and encouragement through the unique healing power of the human-animal bond.

A Community Partner of Pet Partners 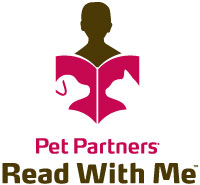 The PAWSitive Therapy Troupe deeply mourns the loss of our dear friend and fellow volunteer Mary Lou Krippner. Mary Lou suffered a sudden, catastrophic stroke this past week and and passed away on February 22nd, 2019. She had been a Troupe member since 2012 with her Shetland Sheepdog, Duncan. Two years ago, she also added Coyote, a second Shetland Sheepdog therapy partner.

Mary Lou and her therapy dogs enjoyed working with struggling readers at Sheisher Elementary School in Lisle for many years. They were also regular visitors at Villa St Benedict Senior Home and on Gottlieb Hospital’s rehabilitation unit. They enjoyed periodic visits with high school and college students during stressful finals weeks and at public library “Read With Me” nights. However, the visits that were closest to Mary Lou’s heart were the visits with veterans at Hines Veterans Administration Hospital. She said “it is all about giving back to those who served our country”. Mary Lou exemplified the compassion and empathy that are so essential for therapy work. Her dogs, Duncan and Coyote brought comfort and smiles wherever they went. Mary Lou as the human member of the team was there as a caring, supportive listener for patients who were lonely or in pain, or for shy young students practicing their reading skills.

Mary Lou was drawn to animal-assisted therapy work many years ago as caretaker for her beloved disabled sister. Mary Lou would bring her dog Charlie into the nursing home whenever she visited her sister. She saw how Charlie brightened her sister’s day and brought comfort and cheer to the other residents as well. She knew that she wanted to continue that work once her sister had passed away. When she adopted a new Sheltie puppy, Duncan in 2011, she immediately knew that he had the right qualities for therapy work. She worked hard on his training and socialization throughout that first year. As a testament to Mary Lou’s outstanding training skills and to Duncan’s sweet, gentle temperament, Mary Lou and Duncan passed their Pet Partner evaluation with flying colors just a few weeks after his first birthday. When her good friend, Marge Ernat died two years ago, leaving behind several Shelties, Mary Lou adopted Coyote, a 9-year-old Sheltie who was a sibling to another one of her dogs. After a few months of additional training, Mary Lou and Coyote became a therapy team as well.

Mary Lou and her dogs appeared in the PAWSitive Therapy Troupe’s “Canine Version of The Nutcracker” in 2012 and 2015. They starred in roles that included duets / trios in the Chinese Tea, Candy Cane and Mother Ginger dances, as well as group dances such as an epic “Fight Scene” Mouse and an elegant “Ballroom Dancer”. The “Canine Nutcracker” was a show dear to May Lou’s heart. She put in many, many hours of practice and “behind the scenes” work to make the shows the huge successes that they were.

Mary Lou was passionate about other causes as well. She struggled with many health issues in her life. She was on dialysis for several years before finally receiving a kidney transplant in 2011. She became a donor advocate for Gift of Life following her transplant. Another cause very dear to her was Sheltie Rescue. She was a volunteer with Sheltie Rescue of Central Illinois for many years—fostering dogs until loving homes were found for them. Several of these foster dogs became Mary Lou’s beloved family members.

Please keep Mary Lou’s family in your prayers as they mourn her death and celebrate her life.

If you are already a registered Pet Partner Team and would like to become involved yourself, please fill out our online application.

If you have further questions about the PAWSitive Therapy Troupe, contact us at: